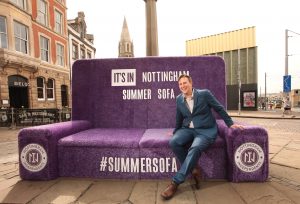 On behalf of Nottingham BID

We were engaged to deliver an Urban Intervention project on behalf of Nottingham BID.

The brief was to come up with an idea to put something within Nottingham city centre that people wouldn’t expect to be there and that they could engage with in a variety of ways.

So, we developed the idea of a giant purple sofa that would be based in a different city centre location for nine weeks.

The design and build of the sofa was complicated as we had to consider that it would be left outside in all weather for nine weeks.  We also had to ensure it was safe and that it would stand up to being used by a lot of people, as well as being moved eight times.

We were delighted with the final results and the level engagement the client received was excellent.