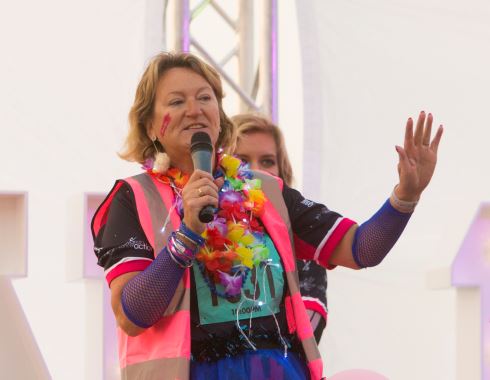 Only three months after their 2016 event, Women V Cancer Ride the Night is already set for another record breaking year in 2017, and has an exciting announcement to make to mark International Day of Charity..

The biggest female cycling event in the UK has already seen over 2,500 women sign up for the 100km night time ride next May. Now the Women V Cancer campaign has secured a celebrity patron in Sue Hill, former Met Detective Chief Superintendent and contributor to Good Morning Britain, This Morning and Panorama.

Ride the Night will see thousands of women pedal through the streets of London on Saturday 27th May 2017 with one aim; to put the brakes on cancer once and for all. The event raises crucial funds for three cancer charities; Breast Cancer Care, Jo’s Cervical Cancer Trust and Ovarian Cancer Action. Event organisers Action for Charity also run a number of overseas Women V Cancer challenges throughout the year.

Every year, these events attract a large number of women from all walks of life and 2016 saw Ride the Night become the biggest female cycling event in the UK. Many of these women have had their lives directly affected by cancer, either through themselves or a friend or family member.

The event, which starts and ends at Royal Windsor Racecourse follows a 100km route through London, sees many women return year on year. For Sue, this will be her second Ride the Night, having been a participant at the 2016 event. Sue said;

“I am so excited about becoming an official patron of Women V Cancer. I signed up for Ride the Night with a bunch of my girlfriends last year in memory of those we have lost to cancer in the past. We do it for all those who can’t – if they can fight cancer, and go through chemo, we can get on our bikes and get our legs moving to help!

“We had an amazing time. The fellowship of the women at the event is wonderful. The camaraderie got us through and we had such a great night. The atmosphere at this event is just amazing! I’ve started recruiting my team for next year already, and I am very excited about getting as many people involved in an amazing event for such worthy causes as possible.”

If you are interested in joining Sue, her team, and the thousands of other women, visit ridethenight.co.uk now for more information and to book your place.

You can join in the conversation on Twitter: @RidetheNightUK and Facebook: ‘Women V Cancer Ride the Night’