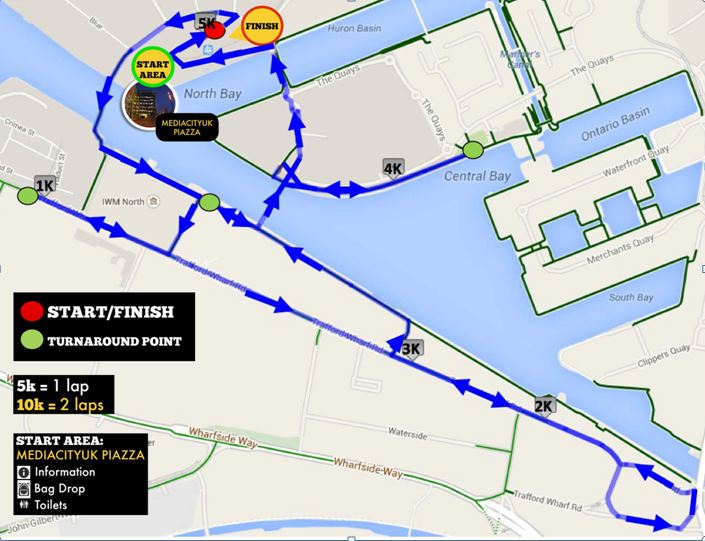 The evening of November 16th will see hundreds of pairs of feet take a high speed tour around Media City UK, taking in landmarks such as the Imperial War Museum North as they complete either 5k or 10k in Run in the Dark Manchester.

The event always sees runners flock from all over Manchester and beyond trying to achieve their best time, with the hope of beating last year’s fastest time of 16 minutes for the 5k route.  The route will give participants the chance to speed around the fast and flat route, crossing the two architecturally stunning pedestrian footbridges that link Salford and Trafford, as well as take in a stunning area of the city lit up in all its glory against the night sky.

Runners will depart from the MediaCityUK Piazza at 8pm sharp, passing the BBC North studios and crossing the water of the North Bay to run a circuit around the Trafford Wharf Road area. They will then cross back across the water, passing the Lowry heading back to the Piazza. Those taking on the 10k challenge will then head around the route for a second time.

Run in the Dark Manchester is now in its fourth year and raises crucial funds for the Mark Pollock Trust, which was set up aiming to raise funding and awareness of spinal cord injury research. The Trust now works with leaders in the fields of science, technology and physiology to find this all important cure.

If you would like to be a part of this worldwide phenomenon, making change for the better, visit runinthedark.org for more information and to register for your place in the event.