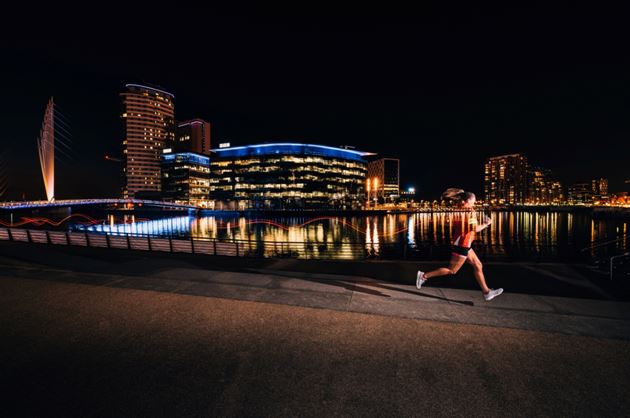 In less than a month’s time, Salford Quays is set to light up the night as hundreds of runners come together to help make a difference for the global spinal cord injured community. Running either 5km or 10km distances, they will become part of an exciting global event; Run in the Dark.

At 8pm on Wednesday 16th November, as darkness falls, Run in the Dark Manchester will depart from the Media City UK Piazza to support The Mark Pollock Trust for a fourth year running. Their mission is to find and connect people worldwide to fast-track a cure for paralysis.

There is currently no cure for paralysis, and the Mark Pollock Trust aims to change this reality to help forward scientific advances from the lab into humans by connecting people worldwide to fast track a cure for paralysis. The Run in the Dark series helps to fund this ambition, which comes from Mark Pollock himself. Being a keen rower before losing his sight at the age of 22, Mark lived a life dedicated to fitness. Going blind didn’t end this and he went on to become the first blind man to race to the South Pole in 2009 to mark the 10th anniversary of his blindness.

Just two weeks before his wedding in 2010, an accident left Mark paralysed, which saw him embark on his biggest challenge yet – pioneering change for the global paralysis community. Speaking of why the people of the North West should get involved in this unique event Mark Pollock said;

“Even though we’re just under a month out from the event, it’s not too late to get training and get involved in Run in the Dark. The mind really does play tricks and tell you that you aren’t ready and it’s going to hurt. Whenever my mind heads down this path, I hear my old rowing coach Tim Levy’s advice about just getting a score on the board.

“It really doesn’t matter whether you complete the run in a great time or not – you have to start somewhere after all! But by taking part in Run in the Dark, the people of the North West can really make a difference.

“My aim is to find and connect people all over the world to help fast track a cure for paralysis. You can help us achieve this, but the first step is getting off that couch and getting a score on the board!”

At the same time, over 50 cities worldwide will host events in the series, which sees people from all walks of life joining the unique event. Whilst some take part to enjoy their city in a different light, others run to improve their personal bests, and some use the event as their first organised run.

Run in the Dark Manchester will start at the Piazza at Media City UK and the fast and flat route will pass the Imperial War Museum North and cross the two footbridges which link Salford and Trafford, which will be lit up against the night sky.

To register for Run in the Dark Manchester, or for more information please go to www.runinthedark.org